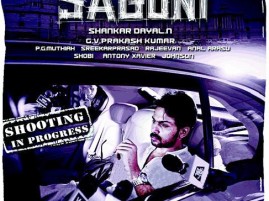 The posters of Karthi-starrer ‘Saguni’ on the walls of Chennai have raised enough curiosity on the film. When probed, all we got were some of the best kept secrets, which we share with you here.
The movie will be the first political satire for Karthi, in which the actor plays a role filled with suspense. Only the climax will allow the viewers to know the real face of Karthi’s character.
Since Karthi topped the box-office charts during Pongal with ‘Siruthai’, he wants to continue the good show during the end of the year too. So the film will hit the screens for Deepavali, we learn.

The actor, who will tie the knot in July, will finish ‘Saguni’ shoot in one go. Produced by Dream Warrior Pictures, the movie directed by debutant Shankar Dayal N will have music by G V Prakash Kumar.