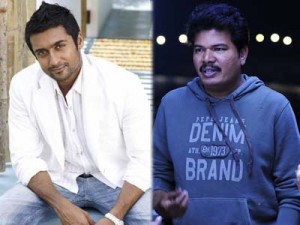 Here is the breaking news about the much awaited combo of director Shankar and handsome hunk Suriya. This is one of the missing partnerships in Kollywood from a very longtime. It was Suriya who was supposed to reprise the role of Aamir Khan in the Tamil remake Nanban but finally the offer landed with Vijay.
The saying “Better late than Never” can be said here as Suriya is likely to star in the direction of Shankar. It is said that the director had made a special script ready for Suriya, where he stars as a solo-hero and this is the reason for Suriya not been in the remake of 3 Idiots which is a multi starrer. The official confirmation is awaited but this is the much needed announcement as his fans are raving for this outstanding combination.

Meanwhile Shankar is busy with Nanban and recently he is back from London after having music sittings with Harris Jayraj. He also has a glimpse of the locations in London, Buckingham and other places for filming few important sequences and three songs. It is heard that Shankar and Manoj Paramahamsa have finalized few locations and mostly during next schedule they may move to London to shoot two songs tuned by Harris.