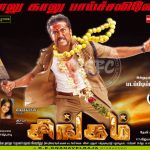 Sun pictures is all set to release Surya’s Singam wordlwide on May 28.
“Singam’ is produced by K.E. Gnyanavel Rajan under the banner name of Studio Green Films and is directed by Hari, who earlier directed Surya in “Aaru’ and “Vel’. South Indian Hottie stars opposite Surya in female lead while Prakash Raj takes on the antagonistic role.

Since, it’s Surya’s 25th film; his fans have been brimmed with more expectations in “Singam, which is touted to be a family entertainer with the right mix of action, fun, romance, sentiments and glamour.
ShareThis