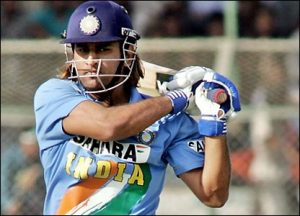 And Dhoni said while bowling the visitors gave away 40 runs extra to the South Africans at the tricky Kingsmead pitch. “They (South Africa) completely outplayed us today (Wednesday). They got off to a good start and posted a challenging total on the board,” the India skipper said after the match.

“Anything above 250 is difficult to chase here. Ashish (Nehra) had a bad day but the three part-time bowlers (Yuvraj Singh, Rohit Sharma and Suresh Raina) did well,” he said. “We were short in the middle overs but we could have done slightly better,” Dhoni added.

Dhoni said to chase such a big target a good start is a must, which the visitors never got. “We didn’t get a good start. It never really happened in the match,” he said.

In the absence of seniors like Gautam Gambhir and Virender Sehwag, Dhoni called on the youngsters to take up the responsibility and strengthen their claim for a spot in the World Cup squad starting next month. “The youngsters who arrived for the ODIs never really got enough practice before Wednesday’s match because it was raining on and off in Durban. But as the series progresses they will get time to acclimatise to the conditions.”

“But it is important for the youngsters to get going and perform before the World Cup,” the Indian captain added.

South African skipper Graeme Smith also agreed with his Indian counterpart, saying 290 is always a difficult chase in the Kingsmead track. “290-300 is always tough to chase here. But it was a complete performance from us,” he said.

Smith lauded his teammates for the clinical display against the Indians on Wednesday. “AB (de Villiers) and JP (Duminy) played a key part with the bat. (Lonwabo) Tsotsobe did well with the ball.”

“Morne (Morkel) also bowled a terrific opening spell. If he continues to bowl like this he will become a difficult customer to face in ODIs,” he said.

Man-of-the-match Tsotsobe, who picked up four wickets for 31 runs, including the prized one of Sachin Tendulkar, said Kingsmead has always been his happy hunting ground. “This is my favourite ground. I have always done well here. I was bit unlucky in Tests but I said to myself that I won’t give up,” he said. “I was just trying to hit the length and the deck today (Wednesday),” Tsotsobe added.