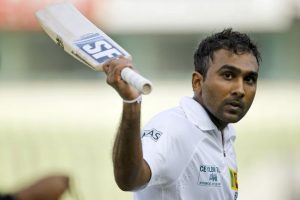 Sri Lanka are planning to give star batsman Mahela Jayawardene a fitting farewell by winning his remaining matches, captain Angelo Mathews said ahead of the first Test against South Africa starting Wednesday.

On Monday, Jayawardene announced he will retire from the longest format of the game in August, after the two-Test rubber against South Africa followed by two matches against Pakistan (Aug 6-18).

The 37-year-old right hander will only be available for one-day internationals, having also retired from Twenty20 cricket in April this year.

“We need a player like him in the team, but he (Jayawardene) has decided to say goodbye,” Mathews said at a pre-match press conference in Galle on Tuesday.

“If we can send him off by winning all four Tests it will be great.”

Jayawardene has been the batting mainstay for Sri Lanka since his debut against India in 1997 and has amassed 11,493 Test runs over a career spanning 145 Tests.

With 33 hundreds and 48 fifties in his kitty, he is the joint sixth-highest run-getter in Test cricket along with teammate Kumar Sangakkara (11,493).

Mathews conceded it would be tough for his team to fill the shoes of Jayawardene.

“He`s been tremendous for us in the past 15 years or so, scoring so many runs. His contribution to the team has been unbelievable. So it`s difficult to replace him.

“But that is the challenge we face in the future… new players should accept this challenge and play well,” the all-rounder said.The immediate task at hand for the home team is to get the better of South Africa who won the recent one-day series 2-1 with an emphatic 82-run win in the decider last Saturday at Hambantota.

It was the first one-day series victory for South Africa on the island.

“It has given the team a whole lot of confidence and belief of winning here,” he said.

Amla, who is set to become South Africa`s first non-white player to lead the side in a full-time capacity, said it was an “honour and privilege” to guide the team as it goes through a rebuilding phase after the retirements of Test greats Graeme Smith and Jacques Kallis.

Sri Lankan skipper Mathews said South Africa had the players who could make the absence of stalwarts count for little.

“They`ve still got these very good players in the team and they are a very strong team to beat whether you play them at home or away as they showed us in the one-day series,” he said.

“They are a very balanced team and we have to be at our best to beat them, it`s a huge challenge,” said Mathews who has been in top form since being named the captain last February.

South Africa have been worried over the fitness of wicketkeeper and key batsman AB de Villiers but Amla said he would make it to the playing eleven.

“He will be playing tomorrow but it`s unlikely he will keep wickets,” he said.

The second and final Test will be played in Colombo from July 24-28.