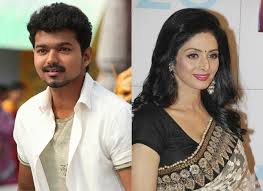 Vijay’s 58th film has hit the floors during the last week. The untitled movie being directed by Chimbudevan has kick-started with a grand song shoot at ECR, Chennai.

Sridevi and Hansika who play Mother and daughter in the movie, respectively are also part of the initial schedule of Vijay 58.

“Working with today’s generation of actors & technicians who r totally professional & focused is inspiration 4 me. So much to learn from them”, posted Sridevi in her official Twitter page.

Sridevi also recollected her past memories and said, “In Chennai shooting for a new Tamil film. Brings back so many memories of first day of shoot as a child actor.”

Further she added, “Thank you Chennai for all the love n warmth you have always given me. It feels great to be back.”