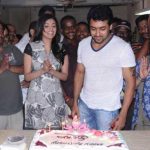 Suriya celebrated his birthday (July 23) on the sets of his KV Anand directed Maatran, which had kicked off a few days earlier.
The star spend his time till evening shooting for the film.
Surya said: “It was another day at work. I have just started Maatran where I’m back with KV Anand after Ayan. Too early to talk about it but it is sure to entertain the audiences.”

Meanwhile the star is all excited about his forthcoming sci-fi film 7am Arivu directed by AR Murgadoss.

Says Suriya: ” It is something totally different, where we have tried out something new within the formats of commercial cinema”.

On Saturday night, Suriya was at home celebrating his birthday with family and close friends.