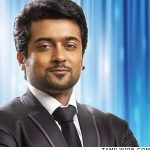 Monday (February 27) was an important day for Suriya for the actor took the avatar of a television anchor by hosting ‘Neengalum Vellalam Oru Kodi’, the Tamil version of ‘Kaun Banega Crorepati’, on Vijay TV.
The actor emerged a winner in this new trade too, as the way he presented the hugely anticipated show won him applause from all possible circles. From his colleagues to friends to fans, everyone is congratulating him, we learn.

“This is because of the homework Suriya did before he started shooting for Neengalum Vellalam Oru Kodi. He personally visited the sets of KBC on Mumbai, took notes on how the show is being hosted there and even met Amitabh Bachchan,” sources say.

On the acting front, Suriya is currently giving finishing touches to KV Anand-directed ‘Maatraan’, which is expected to hit the screens this summer. On its completion, the actor is expected to join hands once again with his lucky mascot, director Hari.