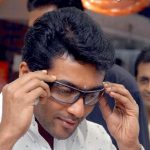 It’s obvious that Suriya’s films dubbed in Telugu get a good reception. Now, we have his yesteryear hit movie Nandha dubbed as Bala-Suriya, which will be released by Nagamalla Shankar of Sri Siva Shankara Art Productions.
Though the film is more than a decade old, the producers are positive as they feel the power-packed performance of Suriya and stunning direction by Bala will draw more crowds to the theatre.
The dubbing works have already commenced and Yuvan Shankar Raja’s songs will hit audio stores by the end of June while the theatrical release is scheduled for the third week of July.