With two grandsons from Kalainyar Karunanidhi’s family making their way into production of films, the third grandson Arulnidhi opts for something different and that’s about making onscreen presence. Yeah! Arulnidhi makes his debut as an actor with Pandiraj’s ‘Vamsam’ and the film’s music release is scheduled on July 2. 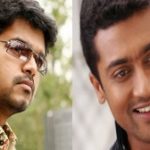 The film is produced by Arulnidhi’s father and is directed by Pandiraj, who earlier shot to fame with his debut directorial ‘Pasanga’. Sunaina of ‘Kadhalil Vizhundhen’ fame stars opposite him in female lead role while Taj Noor, once an associate of A.R. Rahman makes his debut as music director.

The film’s music will be released by Chief Minister M. Karunanidhi while actors Vijay and Suriya will receive the first copies. Similarly, the trailer launched by CM will be received by filmmaker Sasikumar and lyric writer Vaali.