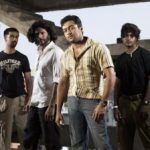 After Ezham Arivu, Surya has given a lengthy call sheet for the film Maatran directed by K V Anand. K V Anand, Surya and Harris Jayaraj are joining hands again after Ayyan. Kajal Agarwal is donning the female lead role.
A G S Entertainments is producing this high budgeted film. There were news earlier that Surya will be donning the role of a person with two heads, but K V Anand denied this news. The crew members mention that the role and appearance of Surya in this film will be totally new for Tamil cinema.

Surya and K V Anand will be leaving for America in connection with the graphics work. Stan Winston Studios who have worked for world acclaimed films like Avatar, Jurassic Park, Terminator and Tamil film Endhiran will be doing graphic works for Maatran. Surya and K V Anand are visiting this studio to discuss about a graphic work for Surya’s particular role in this film.