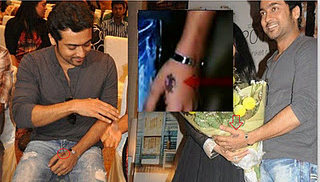 Shahrukh Khan did it for Don 2, by having the initial of his name Don – ‘D’ on his hand. Now we hear that Surya too has inked himself for his upcoming movie.
The movie in talk is KV Anand’s Maatraan, where Surya has tattooed the letter ‘A’ in his left arm. He has also inked a pointed star on his left wrist and lettings in Chinese above his thumb.

Earlier Surya had inked his whole body with names, numbers for AR Mrugadoss’s Ghajini and now for KV Anand. The film has Kajal Agarwal in the lead. The crew were shooting in Russia.

About the temporary Tattoo that Surya has inked for the film, a source explains, “The tattoo ‘A’ denotes the character that Suriya plays in the film, the Chinese script and the star are related to the story and has an important part to play.”

The crew filmed a song in Latvia, while major portion of the film was shot in the Balkan region in countries like Russia, Croatia, Serbia, Albania and Macedonia