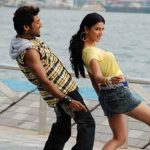 It was just a few hours back we have come across the audio launch date of Ajith’s much awaited film Mankatha and latest buzz is that the audio of Suriya’s 7am Arivu is also gearing up to release just with a few days gap Mankatha launch.

For all Suriya fans out there, 7am Arivu audio is all set to release in a grand manner around August 20th, 2011. The audio of 7am Arivu launch got postponed many times due to some official problems but now the filmmakers are keen to release the audio mostly before the above said date. The album has total of 6 songs including a Chinese track. The Chinese song is the special attraction of the album which was sung by mandarin singer Hau.

Suriya will be performing nearly 10 astonishing feats live on stage along with some trained circus artistes which will be a special attraction of the audio launch.