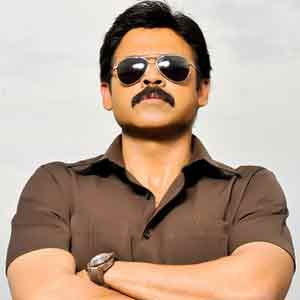 Victory Venkatesh has recently completed his 25 years of successful career in Tollywood and the actor is still busy with nearly half a dozen projects in hand. Venkatesh is currently shooting for Ganga- The Bodyguard, remake of a Malayalam hit alongside Trisha in the direction of Gopichand Malineni and the film is nearing its completion.

Venky will soon begin his next film with director Dasarath, which might hit the floors shortly. The script work is under progress and the pre-production works of the film will commence once the script gets finalized. Venkatesh has also given his nod for the biggest multi-starrer flick of Tollywood that casts Mahesh Babu, which will be directed by Srikanth Addala. Titled as Sitamma Vakitlo Sirimalle Chettu, the movie will move onto the floors in October for Dussera.

Apart from this, Venkatesh has informed that he is planning to do a film based on the life story of Swami Vivekananda that will again be directed by Srikanth Addala. The latest buzz is the Victory star has also signed for another film to be directed by VN Aditya.

With several projects in hand, Venkatesh seems to be quite busy for a couple of years.