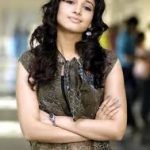 Kandein Kadhalai has been dubbed in Telugu as Priya Priyathama and the film is due to be released soon. This film’s audio launch happened recently in Hyderabad with its heroine Tamannah participating in the event and releasing the audio CD.

Priya Priyathama is a remake of the Hindi blockbuster Jab We Met and the film was a hit in Tamil as well. It has been directed by R Kannan and stars Bharath and Tamannah in the lead roles.

It may be mentioned here that Tamannah is one of the top actresses in Tollywood today and the filmmakers feel that this film would turn out to be a hit with her sheer presence.