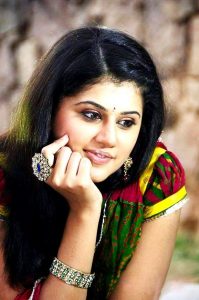 South India’s new sensation Tapasee is riding high with the success of Jhummandi Naadam and Aadukalam, her debut movies in Telugu and Tamil respectively.

This doe-eyed beauty who is flooded with offers these days, is now making her Malayalam debut with megastar Mammootty starrer Doubles, which is all set to hit screens soon.

Explaining about her role in Doubles, Tapasee said: “I play the character of a Muslim girl Saira Banu. The role is short but important as Saira brings the twist in the tale. Mammootty sir plays the role of Giri and Nadia ma’am his twin sister Gowri.”

“I feel lucky to have bagged this film. I was offered Doubles in January 2010, which was even before my Telugu debut. The director happened to spot me in one of my billboard ads, and so he decided to cast me. We started filming sometime in December 2010 and I had a blast during the shoot with Nadia ma’am, Saiju and Suraj,” she added.