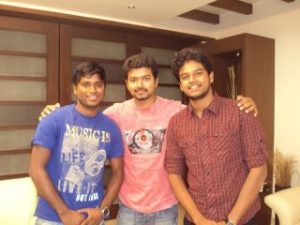 Vijay meets Thalapathy Anthem boys
‘Thalapathy Anthem’, a video song which is composed by three die hard Vijay fans, Vatsan, Dinesh and Amogh is an ode to the Ilayathalapathy. In fact, their tagline is ‘An Anthem For The Commander Of Kollywood’! The video is spreading like wildfire in networking sites, thanks to Vijay’s fans.

Apparently pleased with the sweet gesture Vijay called Vatsan. Says a source close to the young talent, “Vijay was thoroughly pleased with the Thalapathy Anthem and felt he should meet the boys and called them and asked them to come meet him at his residence immediately last evening (February 5). He met Vatsan and Dinesh since Amogh couldn’t make it, spoke to them about their career and appreciated the anthem”.

Vatsan had earlier acted in ‘Engaeyum Eppothum’ and will be seen as the second lead in ‘Mike Set Pandi’.

Vijay was reportedly all praises for the team’s next song as well which will be unveiled shortly.