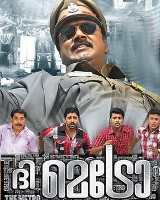 Cashing in on the recent political success of Sarath Kumar in becoming an MLA, one of his films in Malayalam is getting dubbed into Tamil!

Sarath’s The Metro originally made in Malayalam is getting dubbed into Tamil as Kaval Thurai.

The film produced by Malayalam star Dileep under his Grand Productions was released in January 2011 and was lukewarm at the box-office.

It is an anthology film based on three separate incidents that take place in Kochi.

The film also has Bhavana and Malayalam actors in supporting roles.