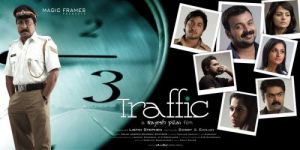 Just when you thought that Malayalam filmmakers have stopped experimenting with newer themes and styles, here is a fascinating movie which will totally shake you up.

Director Rajesh Pillai has come up with the fantastically made Traffic, based on a well-written script by Bobby & Sanjay. There are no formulaic ingredients or gimmickry here and it is a clean, honest film.

The main events mentioned in the story happen on a single day, September 16, at a crowded traffic junction in Kochi. Two friends, Raihan (Vineeth Sreenivasan) and Rajeev (Asif Ali), travelling in a bike is fatally hit by a speeding car at the signal. Raihan was all set to interview a superstar, Siddharth Shankar (Rahman).

Also at the junction, in another car, was a surgeon Dr. Abel (Kunchacko Boban). Sudevan (Sreenivasan), a police constable, who had been suspended for accepting a bribe, had rejoined duty at the nearby traffic police station around the same time.

As fate would have it, the lives of all these individuals intertwine in a curious way from then on. The doctors fail to rescue Raihan and his heart is all set to be transplanted to Siddharth’s ailing daughter. But it is a near impossible task as the doctors and cops get ready to give a try.

They have to carry the heart all the way to Palakkad, in a matter of some hours, by road. The story takes some dramatic turns in between, which make the narrative even more interesting.

Here is one film which has excelled in virtually all the departments. Rajesh Pillai, who has earlier directed the eminently forgettable Hridayathil Sookshikkaan some years back, has shown amazing maturity and technical brilliance while narrating the story. Bobby & Sanjay, the duo known for scripts like Ente Veedu Appoontem and Note Book, has written a complex story in an excellent manner.

Well, the simultaneous happening of events has been a pattern used in quite a few International films like Babel, Amores Perros and Crash among others. Here, Traffic weaves the lives of some people and succeeds in taking you along with its pace by making you hooked into its duration of just under two hours. Editing by Mahesh Narayanan, visuals by Shyju Khaled, music (Mejo Joseph and Samson Kottoor) and back ground score (Mejo Joseph) is top notch.

The actors have all performed their characters in an impressive way and here is one film where almost every actor gets a nice role but still the story remains supreme. Sandhya, Roma, Ramya Nambeesan, Lena and Reena Basheer include the female actors. Veteran actor Jose Prakash is back on screen in a brief appearance, after a long hiatus.

There are some heart wrenching scenes like the one where the helplessness of a superhero is revealed as his daughter fights for her life and the anguish of a father who has to come to terms with his son’s tragic death, for instance. Those moments and the characters continue to stay with you, which is the best thing about the film as well.

There is an inherent sincerity about it that makes Traffic one of most genuine films during recent times. As in every film, there may be sequences which you may feel, could have been better.

But this one is an overwhelming experience which is a rarity in Malayalam of late. Two big thumbs up for Traffic, don’t miss this one!