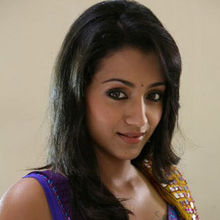 It’s something special to know that Kollywood gorgeous beauty Trisha is going to complete her 40th film with Mankatha.

Besides this Thala Ajith is also completing his 50th film with Mankatha and now Trisha joins Ajith by hitting 40th film in her career. She started her career nearly a decade ago and has completed 39 movies so far in Tami, Telugu, Malayalam and Hindi.

Trisha says “I am happy of hitting 40th film in my career with Mankatha. So far I have done 39 films in Tamil, Telugu, Malayalam and Hindi. As of now I can’t share anything about Mankatha as it is my director’s strict order not to reveal anything about the film until the release. It is completely a boy’s flick and my role is completely different and doesn’t match Manmadhan Ambu or Vinnaithandi Varuvaya. I guess I have done justice”.