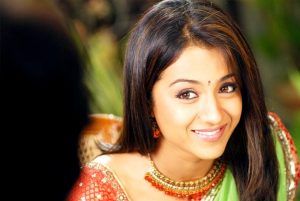 Well it all began as a section of media stated that the ‘Vinnaithandi Varuvaaya’ heroine, Trisha Krishnan is seeing a young Chennai-based entrepreneur Amruth, who is from a flourishing business background. It was also reported that it was the actress’ mom Uma was hubby-hunting for her daughter for the past few months when she came across Amruth.

But the actress in question has quashed all the buzz about her upcoming engagement and marriage as mere rumours. Trisha has also stated that she does not have any plans to get settled in matrimony in the near future.

“I am not getting engaged nor am I getting married to anyone in the near future. If this crazy rumour was true I would first share it with my fans as I have nothing to hide, I haven’t met my Mr. Right yet”, says Trisha speaking on the issue.

As of now Trisha seems to be concentrating only on one thing – films; the actress is looking forward for her movies to hit theatres. In Tamil she is looking forward to the release of ‘Mankatha’ where she shares screen space with Ajith. Trisha also has a couple of films in Telugu.