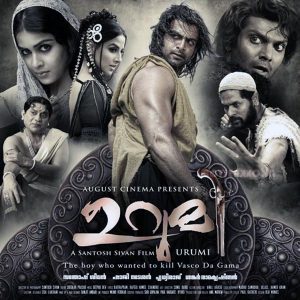 Director Santhosh Sivan’s much-awaited movie Urumi has hit the screens across the state. Although there are some dragging moments in the movie, its rich production values hold the attention of audience till the climax. It is an excellent effort by Sivan and Prithviraj. Hats of to them.

The film is set in the backdrop of the fierce warrior clans of Northern Kerala in the 16th century and focuses on the cult of Chirakkal Kelu Nayanar. It is all about boy, who wants to avenge the death of his father, who has been killed by Vasco da Gama. Santhosh Sivan’s dragging narration in both first and second half tests the patience of the viewers. The climax scenes seem to have taken from another epic film Pazhassi Raja.

The story starts with present generation and soon goes back to history. Chirakkal Kelu Nayanar (Prithviraj) sets on mission to kill Dom Vasco da Gama, the Viceroy of Portuguese Empire in India. But he faces lots of odds on his way to reach his target. He has to encounter many conflicts within the kinsmen, kings, ministers, peasants and Muslim warrior princess Ayesha (Genelia D’Souza) of the famed Arackal Sultanat. He has a forte, a legendary golden Urumi, which is made from the ornaments of women and children, who were burnt alive by Vasco da Gama. Kelu is supported by his childhood friend Vavvali (Prabhu Deva). How he creates his own army and starts movement against the first Colonial advance in India will form the crux of the film.

Santhosh Sivan should be applauded for his perfect casting and tapping out mind-blowing performance from each actor. Prithvi has delivered excellent acting and audience can not stop loving him. He just looks awesome in emotional and action sequences. As Vavvali, Prabhu Deva has done justice to his role. As Ayesha, Genelia’s sword fight (kalaripayattu) scene are superb. Vidya Balan steals the heart of viewers with her item dance. Nithya Menon, Jagathy, Amol Gupte, Alex, Robin, Arya, and Tabu have also done justice to their roles.

Finally, it can be said that Urumi is a great movie, which has excellent acting, awesome technical values. It is a must watch movie.