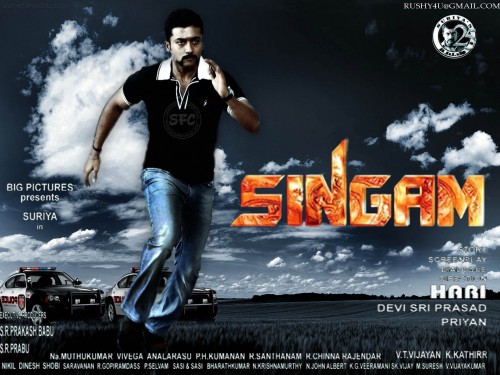 Suriya is sure of scoring a hat-trick with ‘Singam’, after the back-to-back successes of ‘Ayan’ and ‘Aadhavan’. Teaming up with director Hari after ‘Aaru’ and ‘Vel’, Suriya plays a tough police officer in the movie, who fights for a cause.

Produced by Studio Green, ‘Singam’ will have Anushka romancing Suriya. The cast includes Prakash Raj and Vivek in pivotal roles, while music is by Devi Sri Prasad. Priyan handles the cinematography.

IndiaGlitz learnt that Devi Sri Prasad has scored some peppy numbers and one of the duet songs choreographed by Brindha was shot on Suriya and Anushka in the exotic locales of Dubai.

Interestingly, ‘Singam’ is Suriya’s 25th film and he is happy about joining hands with Hari again for this crucial venture. ‘Both ‘Aaru’ and ‘Vel’ were commercial hits. We hope to make it three-in-a-row with Singam,” he says.

On his part, the director says, “Suriya had played a similar role in ‘Kaakha Kaakha’ earlier, but ‘Singam’ is being packaged differently. It will be more vibrant and action-packed.”