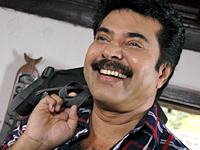 Director V K Prakash, who has directed several technically slick films like ‘Positive’, ‘Freaky Chakra’ and ‘Gulumaal’ would soon be joining hands with Mammootty for a film.

Prakash would start the shoot of his new film, once both his current projects reach the theatres.

Meanwhile Prakash’s another film ‘Karmayogi’ that is based on the Shakespearean play ‘Hamlet’ is also complete. The film has Indrajith doing the title role.