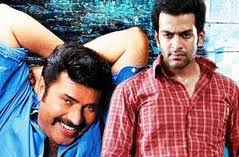 Megastar Mammootty might do the lead role in Prithviraj’s new home production, if reports that have been streaming in from the industry, are to be believed.

Now it seems that August Cinema’s next production would star Mammootty. The reports haven’t been confirmed as yet.

Meanwhile the production house’s first film, ‘Urumi’, has been much critically acclaimed and is gradually turning out to be a crowd puller as well.