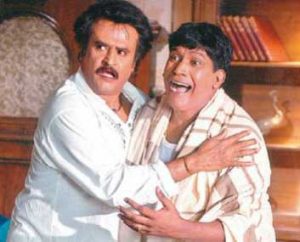 Comedian Vadivelu who commented Rajini’s Rana during the last elections seems to be in a pathetic dilemma as he lost many films due to his election misbehavior.

On knowing the situation of Vadivelu, kind hearted Rajini has decided to cast him in Rana’s star cast. After the elections got over the comedian has been sidelined by several filmmakers in the film fraternity. Even Rajini was also irked with his comments on Rana and actor Vijayakanth, he asked director K.S Ravi Kumar to remove Vadivelu from the project and then it was Ganja Karuppu who replaced Vadivelu as the comedian in the film.

As Vadivelu regretted for his comments, sources say that Vadivelu will be in the ‘Rana’s cast along with Ganja Karuppu!

Hats off to Rajini for his kind heart!