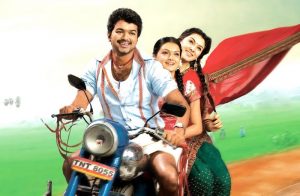 When ‘Kavalan’ was to release, there seemed to be no takers for Vijay films. The actor met with many glitches and had to face some hardships before the release of the film. All that changed post the release of ‘Kavalan’. Offers started pouring in for Vijay who seemed to accept them all with grace. Now the actor has a handful of films with top directors of the country from South India. As we all know he is doing ‘Nanban’ with director Shankar, ‘Ponniyin Selvan’ with Mani Rathnam and his next release ‘Velayudham’ with director M. Raja.

‘Velayudham’ is gearing up for completion and is in its post-production stages. Vijay helms this project with Genelia and Hansika Motwani as his heroines. Like in most Vijay films this film will see Vijay with a younger sister in Saranya Mohan. Genelia will be seen as a journalist and Santhanam will supply the film with steady doses of comical interludes. M.S. Bhaskar will portray an important character in the film.

Here are some important aspects of the film just for the fans of “Ilaya Thalapathi” who are eagerly awaiting news about their hero. For one the film is about a normal man who becomes a hero, and the circumstances surrounding him and his loved ones. The camera will pan the lush greeneries of some villages in Tamil Nadu as well as the glamour of some cities in India; some songs have been shot from exotic locales in Europe.

‘Velayudham’ is produced by V. Ravichandran under the Aascar Films banner. The music for the film has been tuned by Vijay Antony. His earlier stint in Vijay starrer ‘Vettaikaran’ was a huge hit. This film too has expectations running high on the music.

We will bring you more tid-bits from the ‘Velayudham’ front in the coming days. Keep coming back right here at IndiaGlitz.com!