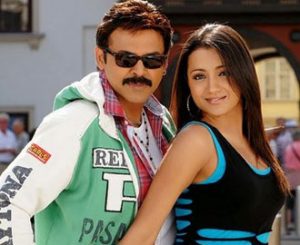 Victory Venkatesh’s new film, which is the remake of Malayalam Super hit Bodyguard is filming its action scenes under the supervision of fight master Ganesh in Ramanaidu Studios, Hyderabad. The film was also remade in Tamil with Vijay and Asin in the leads with the title Kavalan that also proved to be a hit at the Box-Office.

Trisha is playing the leading lady in the film while Saloni is playing second fiddle to her. Gopichand Malineni of Don Seenu fame is directing the remake version. Bellamkonda Suresh is producing the film on the banner Sri Sai Ganesh Productions. Thaman is composing the music for the film.