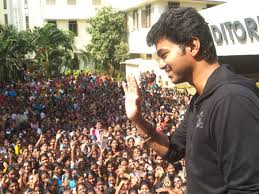 There were recent reports that stated Ilayathalapathi Vijay had discussions with fans in Kerala, regarding his political entry, which are now rumored by Vijay himself.

As we reported viewers, Vijay is busy with Kajal Agarwal, Mohanlal and Mahat Raghavendra for Nesan directing Jilla shoots in Hyderabad from almost couple of months and the Vijay’s Jilla team have recently take wing to Osaka, Japan for a song shoot.

Speaking to press Vijay said the same, “Since past 2 months I was shooting for Jilla in Hyderabad. My fans and I were shocked listening to such baseless reports. For now I’m working upon to release two movies a year for my fans, as promised earlier.”

“I request media not to spread such unjustifiable news and avoid confusion,” he concluded.