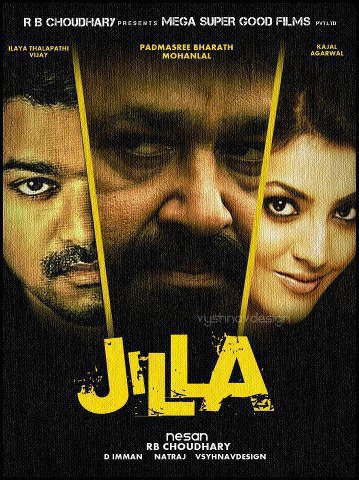 Vijay, Kajal Agarwal and Mohan Lal starrer Jilla completed its first schedule in Madurai. Debutant director Nesan is wielding megaphone for this Tamil-Malayalam bilingual and D.Imman is busy composing tunes for this most anticipated movie.

Yesteryear actress Poornima Bhagayaraj is playing a prominent role as Mohan Lal’s wife and Niveda Thomas is also playing a key role in this film along with Mahat Raghavendra.

The first schedule was shot without lead actor and Vijay will join the shoot in the second week of June. A huge set was erected and major portions between Vijay and Mohan Lal will be shot in this schedule.

Jilla also casts Soori and Thambi Ramaiah in supporting roles. R.Ganesh is handling the cinematography and editing is by Praveen, Srikanth. R.B.Chowdary is producing Jilla under Super Good Films.