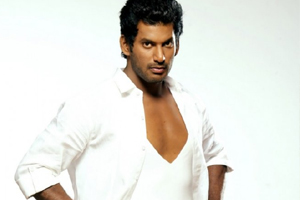 Vishal, the Tamil actor who was busy with the promotions of his tomorrow [Sep 6] releasing Madha Gaja Raja was admitted in hospital as the star is suffering from dehydration.

Sources close to the Challamme actor say, “Doctor suggested Vishal to take complete rest. As he is suffering from dehydration due to continuous shootings in the nights for past 10 days and nonstop promotions of his Sundar C directed ‘Madha Gaja Raja’.”

However, now Vishal is keeping well and fine. In the meantime he is distress as his MGR’s release is put on hold because of the debts made by Gemini Films Circuit that are troubling the film’s release, interim many multiplexes in Chennai stopped the advance bookings.