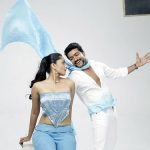 Yamudu, the dubbed Telugu version of Kollywood superstar Suriya’s 25th Tamil film Singam, directed by Hari with Anushka in the female lead, will hit the screens on July 2.
Singam, reported to have grossed a whopping Rs. 78 lakhs during its first weekend, was recently declared a hit by industry experts. The film has music by Devi Sri Prasad.

Produced by Studio Green’s Gnanavel Raja, the film has Suriya playing a sincere police officer Duraisingam. He wants to run his family’s provision shop and convert it to a huge departmental store. But due to his father’s (Radha Ravi) wish, he becomes a cop. The entrance of dreadful don Myilvaganam turns his life upside down.