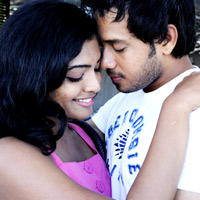 Yuvan Yuvathi directed by G N R Kumaravelan of Ninaithale Inikkum fame is a romantic and breezy entertainer. Think music has bagged the audio rights of the film. The film narrates the relationship between son (Bharath) and father (Sampath) Bharath plays the role of a corporate guy working in an MNC. Both father and son fail to understand each other and interesting conflicts between them would impress the audience. Bharath has gone for a complete makeover for this film and will look different when compared to his earlier films.

Music given by Vijay Anthony is expected to top the charts. Catch hold of the music review once the music of Yuvan Yuvathi is out!

Yuvan Yuvathi is gearing up for its release in August.