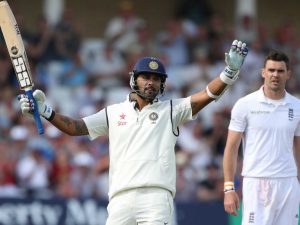 The 30-year-old Vijay (122 not out) notched up his fourth Test century and batted right through the day to steer the visitors to a comfortable position after being reduced to 107 for three just at at the start of the second session at Trent Bridge.

Captain Mahendra Singh Dhoni (50 not out off 64 balls) was giving Vijay company at close on an absorbing opening day`s play.

Vijay decorated his 294-ball stay at the crease with 20 boundaries and one six, while Dhoni struck five fours en route to his half-century knock.

The duo shared unbeaten 81 runs for the fifth wicket, digging India out of trouble after some fine rearguard fourth-wicket partnership of 71 runs between Vijay and Ajinkya Rahane (32 runs off 81 balls, 4 fours) in the post-lunch session.

But India witnessed a scare just after lunch as they lost Cheteshwar Pujara (38 off 69, 7 fours) and Virat Kohli (1) in quick succession to reel at 107 for three at one stage.

In the post-tea session, Vijay resumed his innings at 92 in the company of Rahane. But the latter didn`t last long, getting out in a freak manner soon after the break, bottom-edging a short delivery from Liam Plunkett to captain Alastair Cook at silly point.

The dismissal brought an end to their 71-run fourth-wicket stand that lasted 27.1 overs and saved India the blushes.

The England attack then tried putting pressure on Vijay as he neared his hundred but were unsuccessful as he maintained his composure.

But his single to get to the three-figure mark was anything but calm as a frantic nudge to square-leg put Dhoni in danger, though the India skipper survived.

Vijay registered his fourth Test century off 214 balls, with the help of 18 fours, in the 68th over. It was his first Test hundred outside India and the first against an opposition other than Australia. It was also the 100th Test hundred scored at Trent Bridge.

Dhoni, on the other end, played some attacking cricket and hit lusty boundaries by using his powerful bottom-hand. He brought up his 30th Test fifty in the final over of the day.

Earlier starting the post-lunch session at 106 for one in 30 overs) with Vijay (55 batting) and Pujara at the crease, India lost two wickets quickly as to slump to 107 for three from 106 for one as Anderson and Broad found some reverse swing.

Pujara was the first to go, in the second over after lunch, as the delivery from Anderson jagged in and took off with Ian Bell at silly mid-on completing a stunning one-handed catch diving to his right. India’s number three batsman departed without adding to his tally.

Vijay and Pujara had put on 73 runs for the second wicket in the morning session as the English bowlers found the going tough on a placid wicket.

It became a massive double blow when Kohli was out in the very next over. Broad got Kohli with one that left him minutely and took the bat’s edge falling straight to Bell at second slip. Suddenly India were tottering at 107 for three and with just six batsmen playing and things didn’t really look cosy.