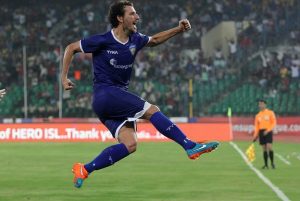 Elano Blumer and John Stiven Mendoza inspired Chennaiyin FC to a thumping 5-1 win against fancied Mumbai City FC with a brace each at the Jawaharlal Nehru Stadium in Chennai tonight. Jeje Lalpekhlua also got onto the score sheet for the hosts while Syed Rahim Nabi notched a consolation..

“It would have been impossible to assist them without their brilliant runs. In fact, all the players supported each other. It was a team effort!” Elano said about the victory at the post-match press conference.

The Brazilian, who is now top scorer in the Hero Indian Super League, has scored half of his team’s ten goals, three of which have come from free kicks and two from the penalty spot. “I practice free-kicks from different positions in training so all that hard work is paying off,” he revealed.

Elano is impressed with his time at the club: “There is a great atmosphere in the dressing room. Everyone starting from the support staff to the foreigners and Indian players have been very supportive from day one. Also the owners are great and motivate me a lot.”

Referring to the crowd support, Elano said he is very happy to perform in such a great atmosphere. “It makes me very emotional to play in front of so many fans. I try to always do the best for my team. I am delighted that we bounced back so well after the Delhi game,” said the Brazilian.

Explaining the rationale for the induction of manager Marco Materazzi in the starting XI, assistant coach Vivek Nagul said, “Yes, it was our strategy to play Materazzi because we wanted to give further protection to the back four. His physical presence and leadership helped us a lot. The other midfielders also supported him well.”