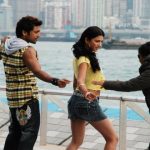 Grapevine has it that the audio launch of 7aam Arivu will take place on September 22nd and not on September 10th as announced earlier. It is said that the audio launch may take place either at the Nehru Indoor Stadium in Chennai or in Malaysia and that it will be a very grand affair.
Further, the audio launch event will be telecast live on Sun TV, says sources close to 7aam Arivu. The film is a magnum opus with Suriya and Shruti Haasan playing the lead roles and AR Murugadoss directing it. Udayanidhi Stalin’s Red Giant Movies is producing this film.