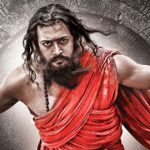 The story of ‘7am Arivu’, Suriya’s forthcoming film directed by A R Murugadoss, is said to be based on a time machine, that is invented by a young scientist, played by Shruthi Haasan.
“The time machine reveals various hidden truths about ancient Tamil history and tradition, even as a powerful gang is chasing the invention to snatch it away. How their attempts are thwarted (by Suriya) and how he makes the world understand and appreciate the richness of Tamil culture is what the film about,” say sources.

Produced by Udhayanidhi Stalin’s Red Giant Movies, Suriya plays three different roles in this film, that of an aggressive monk, a scientist and a circus artist.

Music has been scored by Harris Jayaraj, who gave super hits for Suriya-Murugadoss’ earlier venture ‘Ghajini’. Grand plans are being made for the audio launch function, where Suriya is expected to perform some tricks that he was trained in for his performance as a circus artist in the film.