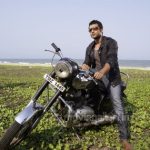 Suriya’s costar in 7am Arivu has four legs! Since Suriya plays a circus artiste in the film what could be more appropriate than a horse for a companion? Apparently this horse is a superbly trained specimen and was invaluable during the shooting. All the portions involving this animal superstar have been filmed so the team wanted to find a good place for the horse where it will be well looked after.
The horse was then put up for sale in a famous market town near Erode which has been functioning since Tipu Sultan’s reign. Many livestock used in films have formerly been sold here for outrageous prices. But Suriya’s horse which was sold for a record sum of 5 lakhs has set the bar really high. The crew members waved it off as the star horse went away with its new owners