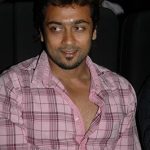 Suriya met the press in a jubilant and happy mood to celebrate the success of his 7 Aum Arivu and to thank the media for their support.
The actor said, “At the start of my career, I could never imagine that any film of mine would get this kind of a response as 7 Aum Arivu has got and that any of my films could do such business. The film has had a tremendous response. Many viewers who haven’t gone to the theatres in a long time have come to see this film, as per what some exhibitors have told me. A very different crowd has come to see this film at many places. Both in India and overseas the response has been terrific. I want to thank the media for their role in supporting me through my career and also pointing out any flaws which made me introspect.”

He agreed that the film had got a mixed response from the media in their reviews but added that the exhibitors, producer and director are very happy with the results. “Singham was my biggest commercial success till now but this film’s collections have surpassed that in the first ten days itself,” he said.

Asked whether he knew that Sruthi would hog so much of the limelight by her character, he said, “I knew the concept of the film and I did not strive to show heroism all through. I knew her character drives the story. But I also knew that the director would deliver the goods and that we were not trying to follow a conventional formula.”

In response to a query, the actor said that Vijay’s wife Sangeetha had seen the film and had said it was good. He added that Rajni had also seen it and said, ‘fantastic work, keep it up’. Answering a query the actor added, “Various people have been spreading news on the Net about some changes in the Telugu version. I ask people not to believe it without seeing the film. In Telugu too Bodhidharman has been shown as being from Kanchipuram only and not from elsewhere.”

The actor is now happy about the way Maatran is shaping up and said that his character is a unique one, never seen before. About news relating to Singham 2, he said, the details would be given in a few days time. The actor revealed that he is in talks with a big director for a period film but nothing is finalized as yet.

Asked to comment on Velayudham he said, “I too am doing entertaining films and its healthy trend to have films of different genres.”