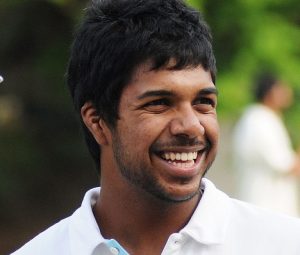 After making an impressive return, fast bowler Varun Aaron said he won’t cut down on his pace despite having a history of suffering stress fractures.

“There is a clear message that I have got to bowl quick and yes shorter spells are better and helpful in that case. I have had five stress fractures but I don’t hold myself back from bowling quick,” Aaron told reporters after rain-hit second day.

“When I was operated one and a half years ago here my target was to be here on this tour. I had a good support system, the BCCI backed me and I worked at the NCA and at the MRF. I am glad to be here and I had a good match so far. I am feeling good with my bowling too,” he said.

Almost two sessions were washed out with only 36 overs possible on day two as England reached 237 for 6 in reply to India’s 152 runs in their first innings.

Talking about the ball that dismissed Moeen Ali, Aaron said: “I had just bowled a bouncer to him and I followed it up with an in-swinger. He has had a problem with the short ball, bouncer followed by a foot-ball is a good method.”

With Joe Root and Jos Buttler stopping India’s charge with a 67-run stand for the seventh wicket, they lead now by 85 runs with three days remaining in the match.

“The wicket has changed from what we saw in that first hour. I am happy that I got wickets when we needed them but there is still a long way to go in the match. England are ahead obviously but they are not too much ahead and even a 100 run-lead is manageable,” Aaron said.