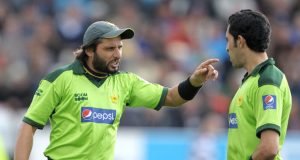 Afridi rapped his batsmen for Pakistan’s defeat in their opening Twenty20 International against New Zealand in Auckland last Sunday and then turned his guns on his bowlers after the tourists crashed to a 39-run loss in the second T20 game in Hamilton Tuesday.

Moin, a former Pakistan Test wicket-keeper, said the bowlers were below-par but was quick to add that instead of rapping them at the presentation ceremony, Afridi should talk to them in the dressing room.

‘A captain should refrain from criticising his players in public because it can affect team spirit. Afridi is a very experienced player and should be aware of it,’ said Moin Khan.

Pakistan allowed New Zealand to post 185-7 at Seddon Park and never really came close to achieving a much-needed win to level the series. The worst performance of the day came from pacer Umar Gul, who was milked for runs by the Black Caps.

Gul, one of the most successful bowlers in the shortest format of the game, gave away 47 runs from three overs at 15.66. Fellow fast bowler Shoaib Akhtar was also quite expensive as he gave away 42 runs from his quota of four overs.

‘We were let down today by our bowlers,’ said Afridi, whose team has lost in all three of its matches played on the tour so far. ‘I was expecting a much better performance from them but they were unable to bowl well in the match,’ he added.

Meanwhile, Ramiz Raja, another former Pakistan captain, suggested that Afridi should bat down the order instead of playing as an opener. ‘The team needs his experience in the middle order,’ he said.

Afridi has promoted himself as an opener for the T20 series against the Black Caps but has so far failed to make much of an impact at the top of the order.

Tuesday’s loss means that Pakistan have already lost the three-match Twenty20 series but Afridi was confident that his team will now allow the hosts a clean sweep.

‘We have to raise our game and I’m confident that we will do it in the next match. The team is going to improve in the coming games,’ he stressed.

Pakistan will meet New Zealand in the last match of the T20 series in Christchurch Thursday (tomorrow). It will be followed by two Tests and six ODIs.

Experienced batsman Misbah-ul-Haq will take charge of the team as Test captain Friday while Afridi and a few other teammates will head back home.