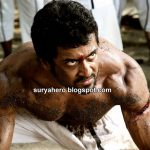 The process to launch superstars from Tamil films has begun. Ram Gopal Varma is going all out to launch the second instalment of Rakht Charitra (Raktha Charitra in Telugu and Rattha Charitiram in Tamil). The second instalment holds a lot of significance since it stars superstar Suriya in the lead. In fact, RGV has thought of a novel strategy to announce the arrival of Suriya in Bollywood. Massive hoardings are coming up at strategic points in Andheri and Juhu with focus on Suriya alone. However, it’s the caption that catches your attention: ‘After Robot The Rajni, it’s Surya The Ghajini’.

It may be recalled that Suriya had enacted the main lead in the Tamil version of Ghajini, which was remade in Hindi with Aamir Khan. In the coming 21 days, the promotions of Rakht Charitra 2 are only going to go bigger and better.