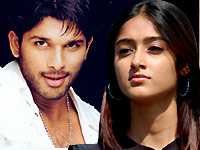 After conveying his decision to Venky, Trivikram has gone ahead and narrated an interesting script to Allu Arjun. Even while he was busy with his wedding, Allu Arjun readily agreed to listen to the script.

What is more interesting is that producer Danaiah has roped in top queen Ileana as the heroine for this film.

This will be Allu Arjun’s next and would go to the sets next month.

Buzz is that Trivikram was miffed with Venky for not confirming which project would go first, his or director Teja’s. While he was in this dilemma, Venky okayed producer Bellamkonda’s Body Guard. Knowing this, Trivikram decided to go ahead with another hero and approached Allu Arjun.

Trivikram was to direct Venkatesh for the same producer. But now he has changed the hero but the producer remains the same. Remember Danaiah produced two big films with Allu Arjun – Desamuduru and Varudu.

Trivikram wants to prove that he can finish a film in a short period of time, so he didn’t want to wait for Venky.