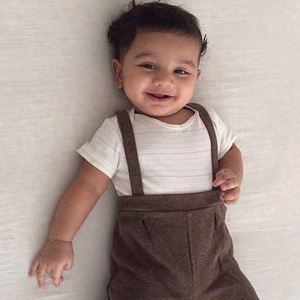 Allu Arjun’s son Ayaan pictures were uploaded in Facebook and Instagram yesterday and the little cute boy Ayaan is taking internet by storm.

Allu Sneha, wife of Allu Arjun had shared a coupe of recent stills of Ayaan, which have garnered attention of Telugu cinema lovers and fans of Bunny.

Like father, like son. Just as Allu Arjun’s posters, Ayaan pictures have received lakhs of likes in social networking sites.

Ayaan has already been lucky to Allu family and especially Bunny, who is enjoying a good phase in Tollywood with the success of Race Gurram.

Post completing his portions for Rudramadevi, Allu Arjun is about to start his new film in Trivikram direction.

Ayaan, the fourth generation of Allu family is expected to make his mark in Telugu cinema soon…