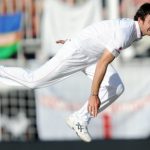 Melbourne, Dec. 8 : A confident England has sent fast bowler James Anderson back home to attend the birth of his second child.

Anderson is expected to return in time for next week”s Perth Test.

According to Fox Sports, England will use their three-day game against Victoria starting on Friday at the MCG as an opportunity to trial potential replacements for Broad.

Chris Tremlett, Tim Bresnan and Ajmal Shahzad, who boast nine Tests between them, are all in line to replace Broad.

“He (Anderson) left last night and he”s going to be there for the birth of his child,” England coach Andy Flower told a press conference in Melbourne.

“We hope everything goes well, and he”ll be back a few days before the Perth Test. We”ve got to try to balance what”s important to our cricket team and also what”s important to these guys in their personal lives. Their family lives, relationships
and children obviously come above cricket,” Flower added.