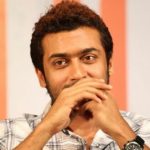 Actor Suriya who has completed 7am Arivu of AR Murugadoss is all set to start his next film Maatraan. The movie is expected to move to floors in July 2nd week , after the wedding of his younger brother Karthi.
The sources says that Maatraan shoot may be delayed as director of the film KV Anand wanted Suriya to look younger for the preliminary shoot.

Maatraan team planned to start the principle photography in the second week of July but now it looks like the film may get delayed as Suriya has to gain younger look and director is very particular about his appearance in the film. During the duo last meet the director asked Suriya to shed down a few kilos and also look younger and fitter for his role in Maatran. This is not the first time Suriya is going to sport younger look as he was seen as 17 year old boy in Vaaranam Aayiram. The actor is yet to start his workouts for fitness as he is currently busy with Karthi’s wedding arrangements.

The pre production works of the film has been completed and the director has return returned from Nigeria with Harris Jayaraj after scoring some tunes for the film.

The filmmakers had planned to start the filming in Alaska with a song sequence.

The team of Maatran is busy readying the sets and other requirements in order to save time when the film moves on to the floor.