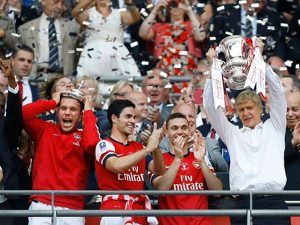 Back at the scene of their FA Cup triumph, the Gunners tore into a lacklustre City side – which saw Willy Caballero start in goal ahead of England’s Joe Hart, and with several other first-choice players missing.

Arsenal were in control by half-time through well-worked goals from Santi Cazorla and Aaron Ramsey, whose extra-time winner had beaten Hull on May 17 to end a nine-season trophy drought.

Substitute Olivier Giroud cracked home a third goal from 25 yards on the hour as City were subdued, with the goal earning the France forward the Man of the Match award.

While Wenger of course accepts much sterner tests lie ahead, he believes Arsenal – with £30million Chile forward Alexis Sanchez one of three new summer signings on display at Wembley – are in good shape ahead of next weekend’s league opener against Crystal Palace.

“I have more attacking options than I had for a long time – that’s for sure. Three, four, five years ago, every year we lost a big player. In the last two years, we added players like (Mesut) Ozil and this season Alexis, so of course that strengthens the squad,” the Gunners boss said.

“I am of course very ambitious, but I am a bit cautious because I have quite a good experience.

“I look around and see the other teams have strengthened as well so it will be interesting to watch the Premier League because it looks like all the big teams will be very strong.”

City certainly did not look like contenders on Sunday, as manager Manuel Pellegrini put out a shadow side, which did not include any Englishman, although £12million Brazilian midfielder Fernando started.

Bacary Sagna watched from the stands against his old club as did former Chelsea midfielder Frank Lampard, signed on loan from New York City FC, while the other players involved in the knockout stages of the World Cup are set to come into contention ahead of their Premier League opener at Newcastle next weekend.

Despite all of those factors, Wenger feels his team, which will be further boosted by the return of their triumphant German trio, are moving in the right direction following a second trophy in the space of 85 days.

“To win the Community Shield gives us a positive platform to prepare, but now the Premier League starts and we have to start well,” he said.

Wenger will try to bring in another defender after allowing former captain Thomas Vermaelen to leave for the chance of regular football at Barcelona.

The 32-year-old is confident for the challenges ahead.

He said: “This year, we can do something different. The players in the squad are top, top players and we are ready for a fight.”