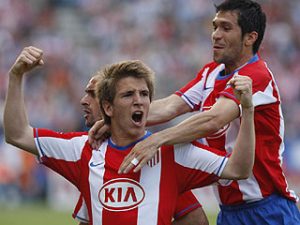 Defensive midfielder Camacho has been sold to Malaga for an undisclosed fee, while goalkeeper Asenjo has been loaned out until the end of the season.

Camacho, 20, seemed to be an exciting prospect two years ago but has hardly played since Quique sanchez Flores became coach in November 2009.

Atletico are sixth in La Liga. Malaga, in contrast, are third from bottom and immersed in a tense relegation struggle.

Sheikh Abdullah Bin Nasser Al Thani, Malaga’s Qatari owner, seems determined to keep his troubled team in the top flight no what what the cost.

On Monday the southern club announced that it had taken veteran Argentine defender Martin Demichelis on a six-month loan from Bayern Munich.

Malaga are also poised to sign Brazil World Cup player Julio Baptista from AS Roma. Last week they signed up Italian veteran Enzo Maresca, who was out of contract.