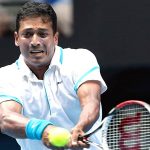 Tennis stalwart Mahesh Bhupathi feels it has been a “big” year for Indian tennis capped by Somdev Devvarman’s exceptional showing at the Commonwealth Games and the Asian Games. He, however, was amused that people were surprised at the Indian players’ performance at the Asian Games and said the
country has been dominating the Asian tennis circuit for the last 25 years. India won two gold medals in the men’ singles (Somdev) and doubles (Somdev and Sanam Singh) events, a silver in the mixed doubles (Sania Mirza and Vishnu Vardhan) and a bronze in women’ singles (Sania) and men’s team event.

Somdev also won the singles title in Commonwealth Games where tennis made its debut.

“It has been a big year for Indian tennis. Somdev has had a great run dominating the Commonwealth Games and then the Asian Games. He has been in and out of top-100 and it’s time that he cements his place in the top 100. Next year is going to be a defining year for him,” Bhupathi told IANS on Sunday on the sidelines of a function organised by Mittal Champions Trust, where they felicitated 17 players, whom they support, for their performance at the Asian Games and Commonwealth Games.

“I don’t know why people are so surprised by our performance at Guangzhou. We have been dominating Asian tennis for the past 25 years now and it just goes to show the depth of Indian tennis. We always expected them to come good. Somdev and Sanam had reached the semifinals of the Chennai Open last year, so it’s not surprising that they won gold. In fact, they were unlucky to miss the gold in the team event (men’s) and also mixed doubles.”

Bhupathi, along with Leander Paes and Rohan Bopanna skipped the Asian Games to participate in the World Tour Final in London. Bhupathi and his Belarusian partner Max Mirnyi were runners-up at the event.

Bhupathi, however, chose to be tightlipped about his grand reunion with his one-time partner Paes for the 2011 Australian Open, the only Grand Slam they have not won. The two will briefly reunite in January to complete a career Grand Slam.

Bhupathi, who is a board member of Mittal Champions Trust, while addressing the athletes stressed on the importance of proper training and hard work.

“Abhinav (Bindra) has set the bar high for us at the Beijing Olympics. We have a year and a half to prepare for the London Olympics and hopefully we will win a lot of medals.”