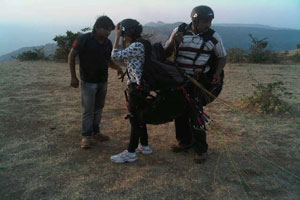 Asin recently got a day off to herself. The actress, who has been tied up with the shoot of Rohit Shetty’s Bol Bachchan in Panchgani, was delighted and decided to make the most of it.

Says a source close to her, “Few people know that she is a fan of adventure sports and loves trying out new stuff all the time. So when she found out about the paragliding facility in Panchgani, she immediately made a plan to try it out. And that’s not all. Apparently, she hires a cycle in the evenings after the day’s shoot to go cycling on a unique trail made especially for cyclists. She tries not to miss out on her cycling as it’s an easy form of exercise.” Now that’s what we call going the Salman way to keep oneself fit!